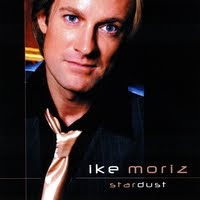 Ike Moriz – Stardust (Mosquito Records London)
In 2009, Ike Moriz released his Stardust trilogy, three albums of swing and jazz songs. The “Stardust” album gave the trilogy its name, and featured perhaps his strongest set of tunes. Without doubt most of the titles will be recognizable to fans of the genre, and the famous interpreters of the Great American Songbook, from Nat King Cole and Ella Fitzgerald to the ratpack stars who reigned over the Vegas casinos in the ‘50s and ‘60s.

Vocally, it’s Cole that Moriz most resembles. He has the same gentle burr to his voice, which makes for some very easy listening. He certainly makes short work of Fats Waller’s “Ain't Misbehavin'”, with pianist A. McPike on his usual fine form. The pair are just as impressive on “I've Got the World On a String”, a song that’s been covered by just about everyone, and Moriz’s take stands tall alongside contemporary versions by Michael Bublé and Rod Stewart.

He leaves some of his strongest work for the final third. His “These Foolish Things” reclaims the song for the Riviera crowd after Bryan Ferry’s ‘70s re-invention. “For Once in My Life” is slowed down and we get to feel every word, and the George Shearing / George David Weiss classic “Lullaby of Birdland” gets a subtle new arrangement, I assume courtesy of bandleader Willie van Zyl.
www.ikemoriz.com
Rob F.
Posted by Bangs at 11/24/2011 03:35:00 pm