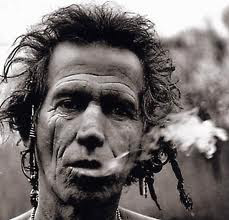 ROLLING STONES 50TH ANNIVERSARY TOUR STILL A POSSIBILITY
Keith Richards has told The Observer that The Rolling Stones will meet up in London later this month to rehearse for the first time since 2008. Though Mick Jagger hasn't said whether or not he's going to turn up yet.

Richards tells this Sunday's Observer: "We're just going to play a little together. You don't necessarily want to rehearse or write anything - you just want to touch bases. That's a good start: me, Charlie and Ronnie. Mick's welcome, and I'm sure he'll turn up, but right now we just want to get our chops down".
Posted by Bangs at 11/11/2011 05:25:00 pm