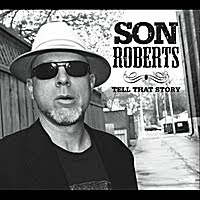 Son Roberts - Tell That Story (Gate Productions Inc.)
Canadian Son Roberts’ 2007 debut “You Don’t Know Yet” picked up a bundle of glowing reviews, including a humdinger from the much-respected UK magazine Blues Matters, so it’s with some excitement that I get to hear (and review) his follow-up “Tell That Story”. Happily, I’m not disappointed. His talent for serving up hearty blues-rock and Americana, with a side helping of rich Southern soul is undiminished, and this ten-track collection makes for fine fare, indeed.

His band, all top players, provides a sympathetic base for Roberts’ songs and voice. Their backing, whether dominated by guitarist John Crosbie or keys-man Ed Roth, is seductive and dense, and must be wonderful to witness first hand in a club setting. On record, turn it up loud and it’s just as much fun. Roberts adds his own harmonica and various backing singers contribute to an inspired production.

As you can probably guess, I’m mightily impressed with “Tell That Story”. There’s so much going on, so much great American music being combined and assimilated with Roberts’ own personal musical vision. Great songs come and go and are promptly followed by their equals; “90 Years Old” rumbles along with the band whipping up the tension, “Kowkash Boogie” sounds like something The Band might have come up with in ‘73 and “Come For a Ride” strips back the layers, and it’s just as effective. Whatever you do, don’t miss out.
www.sonroberts.ca
Rob F.
Posted by Bangs at 11/11/2011 07:38:00 am