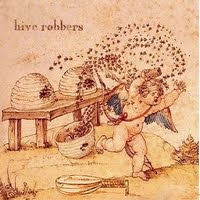 The Hive Robbers - S/T (Independent)
Produced by Eric Vaught, The Hive Robbers’ debut long-player (there’s an earlier EP to be tracked down) is a rustic collection of Appalachian folk and windswept Americana. Of course, there’s a lot of bands like this around, but they keep things fresh by having dual frontmen, Aidan Bailley Williams on lead vocals, banjo, guitar, harmonica and keyboards, and Jimmy Dykes on lead vocals and guitar. They both write.

They’ve been compared to Tom Waits and The Decemberists, and both make sense, but there’s something earthier, less contrived about The Hive Robbers that’s extremely appealing. Both Williams and Dykes are skilled writers, bringing vivid imagery to bear, and no shortage of tunes. The rhythm section of Meredith Yeager on bass and Sam Langstaff on percussion roots the sound in rock and brings depth and intensity to their sound.

“Counterweight” is the first sign we’re onto something good. A lonely harmonica intro brings to mind Neil Young and Bob Dylan, before the yearning vocal appears. “Two-Five-Oh” is altogether more ramshackle but just as fine, with its medicine show buzz and wasted banjo accompaniment. There’s something of Waits’ “Swordfishtrombones” style about it, but more organic and wholesome. “Late On Sunday” gets into its groove early on and sticks with it. As the rhythm jerks and propels the track forward, the redemptive lyrics becoming more powerful with each line delivered.
www.facebook.com/thehiverobbers
Rob F.
Posted by Bangs at 11/16/2011 04:19:00 pm