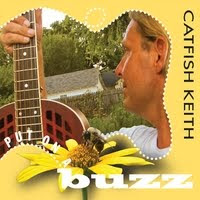 Catfish Keith - Put On A Buzz (Fish Tail Records)
There really should be more like Catfish Keith. In a world in which the standards are set by the feckless, philistine and greedy, Keith’s personal crusade to bring the simple pleasures of the Delta to the discerning public should stand as a role model of a very different kind. ‘Put on a Buzz’ marks the latest stage in his quarter-century journey: a fourteenth collection of traditional country blues, all bar one released on the home-spun Fish Tail Records label run by himself and wife/manager Penny Cahill.

There’s a passionate independence that runs throughout the whole enterprise; it’s reflected in the music, a studied but slightly whimsical take on numbers by the likes of Bukka White, Charlie Patton, Blind Lemon Jefferson et al, and even in the sleeve notes, which wax lyrical about the things he values: the music, his guitars, and Penny herself. It’s a far cry from the sickening commercialisation of music by the media and the business moguls who force everything from over-priced merchandise to digitisation and the X-Factor down our throats, indifferent to the cannibalisation of popular song that follows in their wake.

If you know Keith of old you’ll know broadly what to expect (and be assured that the anticipated standard is maintained here); if you’re new to him and enjoy stylish playing and singing of the kind of material described above then you won’t be disappointed. I guess we could probably say the same in advance of his next half dozen albums as well; there’s no real need for an artist like Catfish Keith to innovate. Just keeping the torch burning is more than enough.
www.catfishkeith.com
Neil B.
Posted by Bangs at 11/19/2011 10:45:00 am