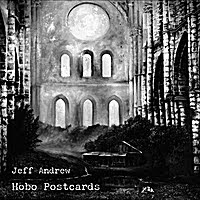 Jeff Andrew - Hobo Postcards (Shade Tree Records)
This is raucous music that knows how to get in your face right from the off. You can’t accuse Jeff Andrew of holding anything back, of having a breather halfway through, or winding it all down nice 'n slow 'n easy at the close. He loads his instruments with his songs, and sets off playing. Almost an hour later we‘ve heard some pretty incredible tales, and the first three can almost sum up the whole journey: asking to be put back in the ground ("Wooden Dresses"), scraping across the country with no money or plan ("Jersey Hill"), and sleeping anywhere you can find ("Please Let Me Sleep On Your Floor"). The songs are poignant, heartfelt, muscular and very literal. I doubt it would take him long to turn most of these songs into parables that would grace any radio show reading. These are good stories, to travel with, alongside, on or in, or to just be around; remember, they may be a little brash, but they’re worthy of a careful listen. Think The Pogues at their most engaging, singing early Tom Waits. In fact, you almost get Mark Lanegan with Isobel Campbell on the title track... almost.

His helpers have brought much to the table that he’s put to good use. Without the added percussion and bass, the odd bits of brass and extra vocals, it might have been a harsher listen, as Jeff has a gruff approach that borders on a shout for vocals, and his guitar, fiddle, and resonator are ably backed up, resulting in a less bombastic sound. Take "When The Whistle Blows", where he forces his own voice to the edge yet again, but it’s given a lovely counterpoint by having a female voice weaving in and out of his own, thus providing a cushion for his raw tone. It’s a beautiful song, put together beautifully - not a strange event at all on “Hobo Postcards”. "Voice In The Floorboards" is just as magnificent and just as jaw dropping as its predecessor. They’re good enough to have been written by Jim Webb in his heyday.

He shows his savvy too, by dropping an out and out rocker into the mix, "Highway Girl", before the concluding four songs hammer home his message: there’s a new songwriter on the block, and he’s going to be around for quite some time, like it or not.
www.jeffandrew.ca
Kev A.
Posted by Bangs at 11/19/2011 09:55:00 am