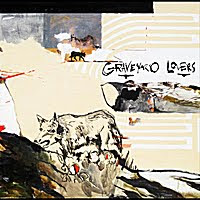 The Graveyard Lovers - S/T EP (Independent)
The Graveyard Lovers are a Brooklyn based garage-blues-rock duo comprising of Zach Reynolds on guitar and vocals, and Tricia Purvis on drums. Of course, inspired by the success of The White Stripes, a whole wave of garage-blues-rock duos came to light, hung around for a bit, before mostly disappearing again, but The Graveyard Lovers have got enough about them to separate them from the surviving pack. Singer Reynolds has got a great voice that’ll remind many of Tom Verlaine, and though there’s no denying the primitiveness of their sound, everything is underpinned by proper songwriting and Purvis’ Mo Tucker inspired tubthumping.

Comprising of just five tracks, their debut EP is a perfect introduction, offering plenty of variety, from the full on primal blast of “Everyday Is A War” to the measured, redemptive blues of “Burn The Malls”. In-between they make their mark on post-punk on “Ripe To Misbehave”, strip back wiry New York new wave on “Urban Blues” and get back to pure, raw blues on final track “The World is Ending”. Simply stated, it’s a great collection and I wholeheartedly recommend it.
www.graveyardlovers.bandcamp.com
Rob F.
Posted by Bangs at 11/17/2011 08:03:00 am