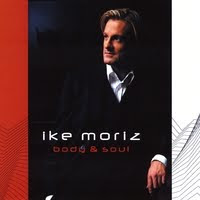 Ike Moriz - Body & Soul (Mosquito Records London)
Ike Moriz maintains multiple careers in the entertainment arts; actor, songwriter, performer, producer, etc., and as a singer, he’s perfectly adept at taking on different genres and styles. For an artist so prolific, he maintains a remarkable level of quality, and I’m sure that the variety of his projects helps keep things fresh. In 2009 Moriz released three albums of swing and jazz that became known as the “Stardust Trilogy”. “Body & Soul” is often listed as the first of the three, though I believe they were released almost simultaneously.

It begins with a serene reading of Eden Ahbez’s “Nature Boy”, a popular song in the 1950s – Nat King Cole had the biggest hit with it – though these days it’s rare to hear a new version. Moriz keeps it simple with a piano arrangement and unhurried percussion, and allows himself plenty of room to tell the story. There are some brave song selections here, but with the help of bandleader Willie van Zyl and pianist A. McPike, he brings something original to some well-worn tunes. His “Autumn Leaves” is just exquisite; “My Funny Valentine” is equally good with McPike weaving magic around the vocal. “Girl From Ipanema” shouldn’t work, but it does, and as for the trio of Sinatra standards (“Come Fly With Me”, “Moonlight in Vermont”, “I Get a Kick Out of You”), he avoids direct comparison by stripping back the instrumentation and holding back on the swagger.
www.ikemoriz.com
Rob F.
Posted by Bangs at 11/19/2011 11:46:00 am