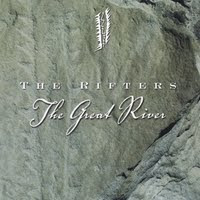 The Rifters - The Great River (Howlin' Dog Records)
Natives of Taos, New Mexico, The Rifters formed in 2002, drawing members from local bands, the Hired Hands and the Rounders. The new band got their act together pretty quickly, carving out an innovative bluegrass-country-rock sound, and recording and releasing their debut in 2004. Mixing up original material and well-chosen covers, they’ve continued that approach for their follow-up release, “The Great River”.

For any band playing bluegrass, or any of its various subgenres, quality musicianship is a must. The Rifters don’t disappoint. They’re top players, and both Don Richmond’s lead vocal and the band’s harmony singing spills from the speakers in a most congenial way. They’re skilled songwriters, too, with tracks like “He's a Drifter My Friend” and “It Just Might Be Me” holding their own alongside songs by Steve Earle, Butch Hancock and Johnny Cash.

The CD begins with Earle’s “You're Still Standing There”, to which they bring a distinct folk edge. It’s an apt opening and perfectly sets up their jaunty take on Keb’ Mo’s “Tell Everybody I Know”. Further highlights appear regularly: Cash’s “Passin’ Though” is stirring and beautifully played, Van Morrison’s “Bright Side of the Road” is broke down and rebuilt in a country-roots style, and it breathes new life into the song. Their take on Butch Hancock’s “She Never Spoke Spanish to Me” is almost as good as Joe Ely’s.
www.howlindogrecords.net
Rob F.
Posted by Bangs at 11/12/2011 04:33:00 pm