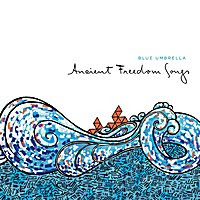 Blue Umbrella - Ancient Freedom Songs (Independent)
Blue Umbrella is an Australian quartet led by singer-songwriter-guitarist John Bailey and his long-time collaborator, drummer Murray Campbell. Based in Perth, on the shores of the Indian Ocean, “Ancient Freedom Songs” was composed and written on Bailey’s ten-metre yacht anchored at Rottnest Island and recorded at Campbell’s Beatworld Studio at Cottesloe. If you don’t hate them enough already, I suggest googling the island.

Needless to say I approached “Ancient Freedom Songs” with the most open of minds, and was pleasantly surprised. Their mix of rhythmic rock, smooth ‘80s pop-jazz (think Sade’s early records) and Bailey’s lyrics work very well, and on a smattering of tracks, Tony Borthwick‘s saxophone makes for a lush finish. In particular “Jean De Luz” and “Blue Sirens”, both of which sound like radio standards, the sort of thing you’ve grown up with, though you’re hearing them for the first time. Bailey’s a talented guitarist, though his playing is always understated and he adds subtle colour to the songs, rather than splashy solos and power chords. His playing on opening track “Secrets” wanders and weaves; yet it’s the song that you’ll notice first. “Corrugated Iron” sits comfortably between Colin Hay and Paddy McAloon, and “When the Light Is Almost Gone” shows they’re not immune to their location, and a little trop-rock and reggae groove tiptoes deftly onto the record.
www.blueumbrellaband.com
Rob F.
Posted by Bangs at 11/23/2011 11:58:00 am