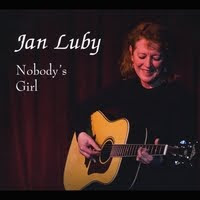 Jan Luby - Nobody’s Girl (Independent)
Currently living in Rhode Island, local publication, Motif Magazine has just voted Jan Luby their Female Vocalist of the Year. Listening to “Nobody’s Girl” it’s no mystery what impressed that magazine’s readers. Luby’s an accomplished songwriter, who makes the whole process sound as natural as breathing. She tells a good story, too, and most of them appear to be personal with their fair share of heartbreak and a little humour to sugar the pill.

She’s certainly got interesting tales to tell. Born to Vaudeville parents (a juggler and an acrobat) she spent her early years living in a trailer, travelling America, before eventually settling in New York where she started acting and dancing. Then it was west to California, where she combined singing and songwriting with street theatre, had a go at comedy, performed at many a festival and got to share stages with Louden Wainwright III, Ani DiFranco and Townes Van Zandt. I think you’ll agree, a far more appealing story than being a runner-up on X-Factor.

“Nobody’s Girl” is a pleasure from start to end; Luby brings a multitude of influences to bear on her songs, from show tunes to country rock, via the great singer-songwriters of the ‘70s to their contemporaries of today. She presents it all within a simple framework of guitar and voice. Her songs, whether she’s giving advice to her children (“Bloom”, “Come Home”), relating tales of hardship (“A Roof and Four Walls”) or looking back to simpler times on the title track, she does so with imagination, a sense of time and place, and with genuine warmth. Put plainly, “Nobody’s Girl” is a fine collection that deserves its own award. Rhode Islanders take note – and everyone else, too.
www.janluby.com
Rob F.
Posted by Bangs at 11/11/2011 07:35:00 am