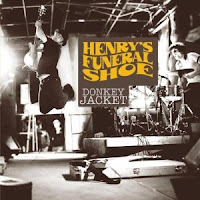 Henry’s Funeral Shoe - Donkey Jacket (Alive Records)
The minimalist pairing of drummer and singer/guitarist in a contemporary blues combo inevitably draws comparisons with the White Stripes and The Black Keys. Given that the latter may be the most dynamic and creative outfit on the planet right now, that should be a daunting prospect for two brothers hailing from the Welsh Valleys. However, there’s little to be ashamed of in what they present on their self-produced debut ‘Donkey Jacket’.

The comparison with the Keys holds good for all the right reasons: slice after slice of electrifying, pulsating, psychedelic swamp blues which override geography or age. With ‘Be Your Own Invention’ and ‘Love is a Fever’ they hit the highway at a formidable pace with songs that stand up to anything their Akron rivals may have put out before ‘Attack and Release’. Not afraid to vary the style and speed they branch out into two convincing raw country ballads, ‘Bottom to Top’ and ‘Heart on Fire’, and supplement their core capabilities elsewhere with impressive guest performances. Of these the harmonica input on ‘Anvil and Chains’ and ‘Mission and Maintenance’ from Van Morrison sideman John Edwards raises both tracks to standout level and introduces real individuality and character into an album that is consistently impressive throughout.
www.henrysfuneralshoe.com
Neil B.
Posted by Bangs at 11/25/2011 11:19:00 am