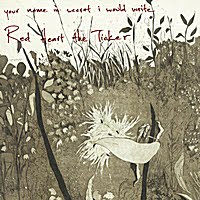 Red Heart The Ticker - Your Name In Secret I Would Write (Auger Down Records)
Another one of those albums a trifle on the mean side – this one clocks in at just over 35 minutes. Sometimes a blessing, occasionally a trial, this particular set of songs could go either way, depending upon your mood, and your feelings for a past that has long gone. This is so traditional a recording that red earth fell from the digipak when I opened it. All twelve tracks are public domain songs, available for any Tom, Dick or Harry to record. Red Heart The Ticker's reason to record them, though, is close to their family heart. Robin MacArthur is the grandson of Margaret MacArthur, who dug these songs out of the memories of other residents who lived in Vermont in the 1940's. These songs aren’t as old as the earth of that particular state, but are getting there, to be sure. Altogether Margaret recorded nine albums, almost by mistake, certainly via a back door invitation. Visit their website to get the full story (links below).

In this instance, every instrument used on the recording has a past, and the sound they make is as pure and heartfelt as could be, with only Robin and his wife Tyler making it. “Your Name In Secret I Would Write” pays homage to a woman who walked many a mile to meet and talk to people, her five young children in tow, so a small but important part of musical history could be preserved, and it would be churlish not to respect it. It would seem almost churlish not to actually like it, but I can say, quite honestly, that I do. The music's appeal is its own honesty, with so much care and attention having gone in to it, to ensure that if Margaret were still around to hear it (she died peacefully in 2006) she would be elated with the result.

I found it almost an honour to be involved as a listener, considering the huge effort gone into the project, which, in its own way, is also preserving a part of our musical heritage for us. It would be boorish to select any tracks as better than others, though I simply melted away listening to "My Dearest Dear", a fitting and most beautiful end to this (almost sacred) music. My thanks and respect to all who helped in the venture.
www.rhtt.net
www.yournameinsecretiwouldwrite.blogspot.com
Kev A.
Posted by Bangs at 11/12/2011 05:26:00 pm