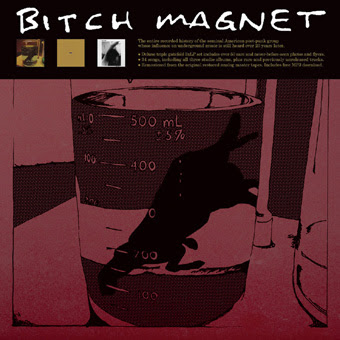 "Searing post-hardcore punctuated with bruised introspection that stands a mile high above most of its kind... Bitch Magnet anticipated the emergence of what would become known as 'post rock'." Mojo

Temporary Residence Ltd. is proud to present the remastered and repackaged reissue of the legendary Bitch Magnet’s seminal and critically acclaimed three albums –
Star Booty, Umber, and Ben Hur on 13th February 2012. The deluxe 3xLP/3xCD package includes all three albums, plus more than a half dozen rare and previously unreleased tracks, a total of 34 songs, remastered from the original, restored analogue master tapes.

The reissues will include five previously unreleased early versions of key Bitch Magnet songs recorded nearly a year before the sessions for the band’s landmark second album Umber: “Punch and Judy, “Joan of Arc,” “Big Pining,” “Joyless Street,” and “Sadie.” Those five songs were newly mixed with John Congleton (Explosions in the Sky and St. Vincent) in October 2010. The reissues also include a rediscovered 'louder' mix of Umber’s classic lead-off track “Motor” - an artefact the band had forgotten about until Mike McMackin, who recorded Umber, unearthed it from his personal archives.

Two non-LP tracks recorded during the sessions for the final Bitch Magnet album Ben Hur, “White Piece of Bread” and “Sadie,” are also included on the reissue. All of these tracks, as well as the band’s three albums, were remastered from the original analogue tapes by Alan Douches at West West Side Music. Both CD and LP reissues contain over 50 rare Bitch Magnet photos, posters, and flyers.

Bitch Magnet was formed by guitarist Jon Fine and bassist/vocalist, Sooyoung Park at Oberlin College in 1986. Drummer, Orestes Morfin joined shortly thereafter. Upon the release of their debut, Star Booty, in 1988, the band garnered rapturous reviews and established itself among the top tier of America’s independent music underground. The band’s reputation grew with subsequent tours of the US and Europe and the release of Umber (prominently included by Mojo magazine on its list of “Lost Albums You Must Own”) in 1989 and Ben Hur in 1990. The latter two have been frequently cited as a key inspiration for what would become known as “post-rock,” a term that continues to baffle and amuse the band.

Along with their contemporaries in Slint, in the years following its breakup, Bitch Magnet has been recognized as a significant influence on generations of aggressive and musically complex bands, including Don Caballero, Mogwai, Rodan, June of 44 and Battles.

“Probably more than any other band, Bitch Magnet sent me in the direction I took with the music I have tried to make,” said Battles’ Ian Williams, whose band’s invitation to play at All Tomorrow’s Parties coaxed Bitch Magnet out of retirement.

After performing at All Tomorrow’s Parties in Minehead on 10th December, Bitch Magnet will co-headline The Garage in London with a reunited Hot Snakes on 13th December. You can also catch Bitch Magnet at the Lexington, London on the 12th December.

Side B:
Lookin’ At The Devil
Gator
Spite y Malice
Crescent
White Piece of Bread*
Sadie*