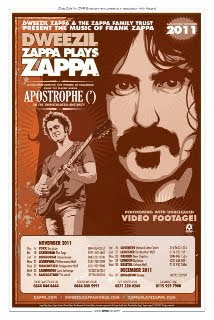 Zappa Plays Zappa at DeMontfort Hall, Leicester (27th Nov.)
I’d been looking forward to this one for weeks. Young Dweezil Zappa playing his dad’s “Apostrophe” album from start to finish with plenty of favorites tagged onto the end. Through the magic of technology, Frank turned up for a few tunes via a big screen, and father and son traded precise solos and the band played along, making it all look easy. And let’s be honest, Frank Zappa’s music was rarely easy. His mix of weird time signatures, jazz-rock, off-the-wall humour and hard rock attracted a certain sort of ‘head’ and a good proportion of Leicester’s finest turned out last night.

Beginning the show with a fan’s request, an instrumental piece which served to warm up the crowd, they then dived straight in “Apostrophe”, with vocalist Ben Thomas getting to grips with the album’s spoken word style – almost a narrative on “Don’t Eat The Yellow Snow” and “Nanouk Rubs It”. Of course, the success of the recital depends greatly on the album’s centerpiece track, “Cosmik Debris”. Barely over four minutes long on the original record, here they stretch it out considerably with Frank taking vocals and one of the guitar solos and Dweezil taking the other. Honestly, they could have stretched it out for another half an hour without complaint.

“Apostrophe” was concluded and then it was time for the hits (I know, I know). “Inca Roads”, “Peaches En Regalia”, “Muffin Man” and “Cheapnis” all got a spin, with Dweezil offering occasional snippets of info regarding provenance and such like. But it wasn’t a night for talk, and there must be all kinds of emotions coming into play when you’re singing and playing your late father’s songs, in front of him, on screen at least. The band finished with “Dancing Fool” and the crowd got to their feet as one (much to the chagrin of the feisty DeMont stewards, who really shouldn’t be allowed caffeine before a show), and then it was over. We left Dweezil perched at the front of the stage happily chatting to the fans and signing everything that was thrust into his hands. A true pro – just like the old man.
www.zappaplayszappa.com
Rob F.