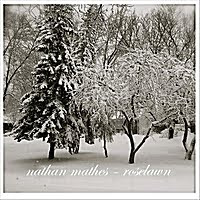 Nathan Mathes - Roselawn (Nathan Mathes Music)
He's quite the worker is Nathan. This is his second album in the last two years, he plays all the instruments on the album, he’s written a book, and I bet he made the tea as well. A certain Jane Mathes (wife or sister, there is no telling), provides a pleasant vocal counterpoint on occasions, and is also responsible for the cover photo of the album, depicting a winter scene of snow-drenched garden trees, which encapsulates a very particular type of beauty. I was going to say that the music here also has a type of beauty, which is true, but it also has a flaw. Nathan sounds tired, as if he has taken on too much, even on the slightly more up-tempo "Maybe We're In Love", which is preceded by three songs that are very pleasant, but it’s hard to tell them apart. "So It Goes", the next track, starts off all about January, the maudlin afternoons and dark nights, and that sort of sums up the pervading mood here. From start to finish there are no real 'sunny' tracks to be heard.

A large number of artists have hit the indie folk trail recently, and here’s another one, albeit a fine one, who struggles to come up with something that little bit different. That said, the final track breaks the link, and "Tell Me How Much You Love Me" has a cinematic approach that is exceptional, despite it being well short of two minutes in length. The brass in the background has a haunting beauty, the mulled voices have an allure all their own, if only there had been a little more of this bravado shown on the earlier tracks, or he’d decided to intersperse the songs with more of this type of thing - who knows…

It is a shame, this lack of an alternative sound, but having done it once on that final track, it might be that he’ll turn his obvious talents in this direction next time, and I’ll be ready and waiting to see what he comes up with.
www.nathanmathes.com
Kev A.
Posted by Bangs at 11/19/2011 10:54:00 am