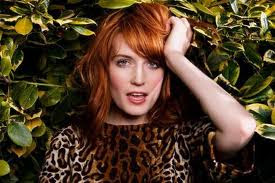 FLORENCE AND THE MACHINE ANNOUNCE ARENA TOUR
Florence And The Machine's Florence Welch has just announced a series of big old arena dates, which will take place in March of next year. All this live fuss comes in the wake of Florence et al's new album 'Ceremonials', which has sold over one million copies since its release a fortnight ago. If you'd care to watch Florence falling off some scaffolding onto some choirboys, her new 'No Light, No Light' video is the one for you. You'll find that below, after these tour dates: