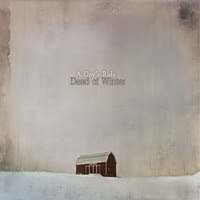 A Day’s Ride - Dead Of Winter (Independent)
The cover (and title) of A Day’s Ride’s “Dead Of Winter” EP suggests a stark, back-to-basics Americana band, brought up on early Low albums and Palace Brothers b-sides. In fact, nothing could be further from the truth, although they’re very much an American band, it’s 1970’s blues-rock that provides inspiration. They probably wouldn’t have sounded out of place on the soundtrack to Cameron Crowe’s “Almost Famous” movie, or supporting Bad Company.

There are a couple of things that place them into the here and now. Singer-guitarist Jon Jackson has a voice full of soul, with more than a hint of vulnerability at its edges. With a production that ‘feels’ modern, it contemporizes the band’s sound and allows them plenty of space to grow.

The five songs on “Dead Of Winter” are real band efforts, with the rhythm section of Andrew Mast on drums and Karl Messenger on bass lying down sinewy grooves with guitarists Jackson and John Gallo working the spaces. It’ll make you move, for sure, and though they’re rarely as heavy as their ‘70s forerunners, or later bands like the Black Crowes, it’s to the latter that songs like “Man With a Thousand Parts” or “Keep Me From Drownin'” draw the easiest comparisons. If you’re curious, have a listen on their Facebook page.
www.facebook.com/adaysride
Rob F.
Posted by Bangs at 11/23/2011 12:36:00 pm