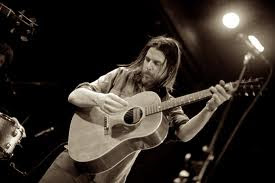 Click on the link to check out the video to "Desert Raven"… http://www.youtube.com/watch?v=-hYiY1vOOVw
Critical acclaim for "Gentle Spirit", the debut album from Jonathan Wilson, out now on Bella Union records...

“The highlights are many. Natural Rhapsody morphs from wobbly retro synths into an elegant CSNY-style suite; Woe Is Me is draped in a granite-heavy narco haze punctured by shafts of acoustic guitar; Desert Raven features chiming Byrdsian guitars… By being so dedicated to the past, Wilson has shaped a delicious future.”
MOJO – 4 stars ****

“A satisfying late entry in the canyon tradition.”
Uncut – 4 stars ****

“Beautiful and bewitching”
The Guardian – 4 stars ****

“Wilson has learnt his craft impeccably… this is pretty close to perfect.”
CLASH – 9/10

“Wilson has a vinyl, analogue sensibility which oozes warmly through Gentle Spirit, right from the title track’s opening piano and acoustic guitar motifs. His hushed, breathy vocal embodies the gentle spirit itself, its incantatory warmth affirming a pure faith in music.”
The Independent – 4 stars ****

“This LP revives the hippyish vibe of the late 60s and early 70s, evoking the harmony-laden folk-rock of Crosby, Stills and Nash, with lyrics rich in bucolic imagery”
Metro – 4 stars ****

“This immersive double-length album is so languid that it might have its own gravitational field, pulling you earthwards to examine the sky in some detail, growing your hair out with every slowly unfurling guitar line.”
The Observer – CD Of The Week

“Wilson draws you into his world with sprawling harmonies, hypnotically pattering rhythms and dreamy singing, with the occasional psychedelic guitar solo lighting up the landscape… Gentle Spirit will make a Laurel Canyonite of even the fiercest modernist
Financial Times – 4 stars ****

“Jonathan Wilson looks and sounds like he spring fully formed from Laurel Canyon at the height of the swinging sixties… Let Wilson’s mellifluous voice wash over you and this record’s slow-burning charms begin to take hold.”
Evening Standard – 4 stars ****

“Strong songs and attention to detail”
Mail on Sunday – 4 stars ****

“An updating of the late-60s model of golden, folk-inflected pop”
Independent on Sunday – CD Of The Week