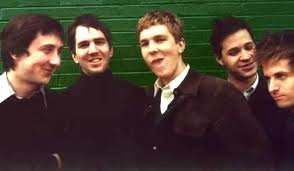 THE WALKMEN TO BEGIN WORK ON NEW ALBUM THIS MONTH
The Walkmen will return to the studio to begin work on their next album later this month, according to Pitchfork. Produced by Phil Ek, the album is due to be released through Fat Possum/Bella Union next summer.

Next year also marks the band's tenth anniversary, and to celebrate they are re-releasing their brilliant debut album, 'Everyone Who Pretended To Like Me Is Gone', on 180 gram vinyl. Due for release on 10 Jan, only 1000 copies will be pressed. Details on how to get it can be found here: thewalkmen.com
Posted by Bangs at 11/09/2011 01:21:00 pm