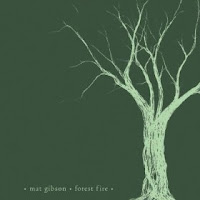 Mat Gibson - Forest Fire (Clubhouse Records)
Here we are again, in classic folk, singer-songwriter territory. This can get burdensome, trying to find something good to say about artists desperate for attention, just themselves and their guitar. And usually some mates turn up to pad out the sound. There really are an awful lot of them out there. However, this isn’t the case with Mat Gibson. At first I thought it was going to be difficult to be positive (album opener "Lord Only Knows" is not indicative of the other six tracks at all), but I can quite comfortably find something affirmative to say about the man and his music. I mean, sure, you can tell it’s the same artist, but there’s more to him than what first track suggests. It appears, on first hearing, that vocally, he’s trying too hard, and the tune’s a little lightweight, and even after listening to it a few times, I can only suggest that it might have been better placed in the middle of the album.

"Yonder Burning Trees", the second track, sounds so relaxed by comparison, and he’s obviously settled into his task of convincing us he’s worth our time - and he is. Following this beautiful number is one even prettier, "Forest Fire" itself, where strings have been enlisted (a certain Joe Bennett supplies them) to augment the sound. "Jonah" has a tune and lyrics, that give him scope to sing almost lying down, a languorous approach, with repetitive moments that linger after the track has ended, but not to the detriment of "Icebergs," or “The Last Songbird".

He finishes with a track that almost wigs out, "Where Demons Go", with electric guitar featuring for the first time, and adding a slightly raucous feel to the proceedings. It introduces urgency right at the end. This rounds off the record very nicely, and might be a pointer to what he is going to be about on his next outing. I’m looking forward to it. It should be fun.
www.matgibson.co.uk
Kev A.
Posted by Bangs at 11/13/2011 02:58:00 pm