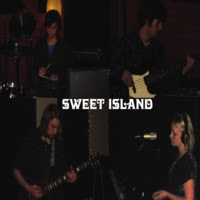 Sweet Island - S/T (Independent)
Acid-blues-rock band Sweet Island was formed in 2009 at Philadelphia’s LaSalle University when guitarist Pete Stanko met drummer Bill Marconi and they began jamming together. Stanko’s old friend Tom Boston was brought in to play bass and they began gigging in earnest as an instrumental trio. The following year they recruited vocalist Kate Kennedy, triumphed at a local battle of the bands competition and recorded their self-titled debut.

Bringing in Kennedy was a wise decision. Her voice is not unlike Curved Air’s Sonja Kristina, and it dominates Sweet Island’s sound and provides focus. When playing live I can imagine them stretching their musical muscles and extending songs, but everything here is kept quite succinct with the majority of tracks coming in around three to four minutes, and only the final track over five. It’s Kennedy’s vocal, high in the mix, which leaves the greatest impression.

Though her band mates are no slouches. Guitarist Stanko weaves muscular runs behind and around her, and the rhythm section provide solid propulsion. The album doesn’t hang around; it’s been and gone in less than half an hour, and that’s the best way to hear it. Though, if you’re only looking for a few tracks to put on your Mp3 player, then go for the strident opening cut “Somebody Guide Me”, the gossamer light “Dream Catcher” and the slow blues shuffle of “The Sky Never Lies”.
www.reverbnation.com/sweetisland
Rob F.
Posted by Bangs at 11/17/2011 07:52:00 am