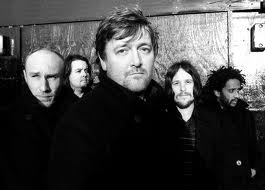 Elbow are to record the BBC's soundtrack for the London 2012 Olympic Games, it has been announced.

The band, who won the Mercury Music Prize in 2008 for their album The Seldom Seen Kid, have composed a six-minute specially-commissioned track.

Lead singer Guy Garvey said they were "knocked out" to get the role, and the band felt "real responsibility".

The news came as the BBC announced its cultural programmes for the Olympics and the London 2012 Festival.

The Elbow theme will be used by the BBC across its Olympic content. Further details of the track itself have yet to be released.

Guy Garvey told the BBC: "We are knocked out to be involved and it's been quite a challenge.

"We have feelings of real responsibility as we will be the soundtrack to so many images of personal sacrifice and endeavour while the nation roots for and celebrates with Team GB."

The BBC's Director of London 2012 Roger Mosey said Elbow's piece had yet to be recorded. The first bars of it would be aired around the time of the torch relay beginning in May 2012, with the full work revealed near to the Olympic Games opening ceremony.
Posted by Bangs at 11/24/2011 01:24:00 pm