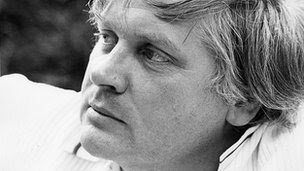 British film director Ken Russell, who was Oscar-nominated for his 1969 film Women In Love, has died at the age of 84.

His son, Alex, said he died peacefully in his sleep in a hospital on Sunday.

During his career, he became known for his controversial films including Women In Love, which featured Oliver Reed and Alan Bates wrestling nude.

He also directed the infamous religious drama The Devils and The Who's rock opera, Tommy, in 1975.

Film-maker Michael Winner hailed Russell's "duplicity of mind", adding he had made an "enormous contribution" to British cinema.

"He pushed the barriers completely and got away with it sometimes and didn't others, but he made some startling movies," he told the BBC.

"He had an eye for the composition of each image on the screen - a great eye for imagery and then, of course, he had a great idea for the grotesque."