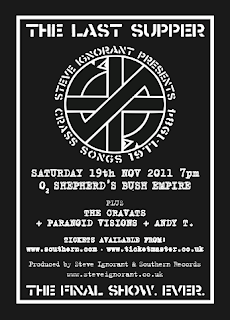 Steve Ignorant’s Last Supper at the Shepherd’s Bush Empire
This has to go down with the best gigs I’ve ever attended, though I was so unprepared for it I should have had my credentials (what credentials?) scrutinized to hell, maybe scrabbled, or even scrunched up and made to swallow. So, not worthy of being there, I was one fortunate SOB who witnessed a sad moment in musical history, although I didn’t know it until the show was in full swing. That’s when it hit me. The last ever concert by Crass, although it was sold (and sold out) under the name I’ve also given this article. Steve Ignorant, founder and lead singer of Crass, had with him my friend's son Peter on bass, and his partner, Carol, as the female vocalist. I said "Yes please!" to the chance to go to the Shepherd’s Bush Empire to see this final gig by this peace-not-war, anarcho punk band, who I knew so little about. Peter had offered me the chance to go along, as both his parents were going as well, and I thought "Why not... seeing them onstage together, in a large auditorium... should be fun!"

Euphoria is a word that can only describe the edges of my feelings by the time it was over. Seeing both Peter and Carol performing on stage, in front of a mosh pit that heaved like a sea in a heavy swell. And yet I can’t remember the last time I saw so many smiling faces, even as they went by in a blur. I envied their spirit, their vigour, their communal fellowship, and had I joined in I would have lasted about ten seconds, give or take, er, ten seconds (actually, I would have been diving from the balcony, so I guess I wouldn't have lasted any time at all).

I realised that something powerful was afoot when the first support band got a rousing cheer after each song. I was still coming to terms with the fact that the lead singer appeared to be as old as I was, and, judging by his outfit, a traveller to boot. Nothing wrong with either, and joined in the ovations. I was finally getting the message - this whole show was very, very important to this full house. The second band had a bloke singing who you would definitely have crossed the street to avoid, whether he told you to or not. He had a look about him that said, quite simply, "don’t mess with me". Their final song was an absolute killer, entitled "I Hate The Universe", and despite the title it was the nearest to a melody I heard all night, with a rousing chorus that you just had to join. With a title like that, you just can’t possibly follow it, can you? Well, I didn’t know the power of the man who calls himself Steve Ignorant...

Peter had already told me that the opening number would blow everything away, and he was right. The title? C'mon, this is Crass! It doesn't matter, any more than knowing the names of the support bands! This was mental, built on 30 years of mental, but with a defiant message of opposition that is just as important today as it was when it was first unfurled all those years ago. It’s encapsulated in the band’s banner headline, "Fight War Not Wars".

Besides Peter and Carol there was Prodigy guitarist Gizz Butts, and Spike T Smith (Killing Joke) on drums. The original members had all given their blessings, and once seen, and heard, you could understand why. To say the band looked the part is a huge understatement. They had more 'presence' than Santa could possibly deliver, and the appeal of their authentic musicianship was universally acknowledged. As for Steve, he followed two pretty powerful vocalists who were in the same field as him, but he shaded them both, without question. He referred to himself on more than one occasion as 'old git', but he’s still producing the goods - a badge of honour rather than a put down. I hope that he has new goals in his sight, with this band, and that he drops the 'Ignorant' moniker for one more worthy of him.

I think it tells you a lot when you can go to a gig and not worry what the band might play, or who the support bands are. If you were young enough (hardy enough!) you went moshing, and if you were open-minded enough you would recognise the sheer, sad beauty of the occasion. You would leave the venue as I did, with my heart beating just a tiny bit faster, and my feet not quite touching the floor. We were fortunate to be there, Crasstafarians and the rest of us, to share this last great musical supper.
Kev A.

FOOTNOTE: The support bands deserve a proper mention: First up were Paranoid Visions, originally formed in Dublin, in 1981, now with two girl singers as well as the bloke. Next were The Cravats, who formed in 1978, near Birmingham (I DO like the 'near' bit!). The somewhat scary singer is the original man himself, and Cravats’ founder, Shend (or 'The Shend'), and it was interesting to see him making an appearance on the Ricky Gervais and Stephen Merchant new black comedy series “Life's Too Short”, recently. Respect!
Posted by Bangs at 11/25/2011 12:45:00 pm