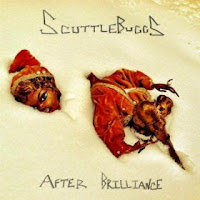 Chicago duo Kevin Golden and Claire Kander are the Scuttlebuggs. Golden is a member of Beaten By Yuri, and Kander has provided voice-overs for commercials. Together they make music that brings to mind an array of artists, from the Everly Brothers to Low and The Original Harmony Ridge Creek Dippers. Folk and country are at the root of their sound, but they’re open to other influences, and “After Brilliance” has been recorded with a full band, including various keyboards, violin, pedal steel, bass and drums.

Both Golden and Kander write the songs, and both sing them. Their “togetherness” is evident throughout the eleven tracks of the album. Often singing together, their harmonies are delicate and graceful, and bring an indie edge to the Americana arrangements. They begin the record with “Outlawz”, a quirky song about breaking the law, which has considerably more in common with Bonnie Prince Billy than Judas Priest. “Combover” arrives fully formed on the coattails of an upbeat country shuffle and “The Kids” warms up with a little psychedelic magic, via Twin Peaks’ Black Lodge, before settling into something quite gentle and positively life-affirming. They end with the beautiful, haunting “Autograph”, which ebbs and flows like a classic Neil Young song.
www.facebook.com/Scuttlebuggs
www.scuttlebuggs.bandcamp.com
Scuttlebuggs CD Baby Page
Phil S.