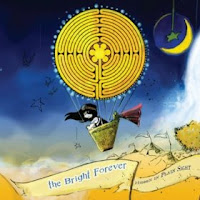 The Bright Forever is the musical pseudonym of Megan Hook, a singer-songwriter originally from rural Pennsylvania and now living and working in Los Angeles. The intriguingly titled “Hidden In Plain Sight” is the first part of a trilogy of albums to be released in 2013 - the second collection “Carried Away” has already been released, and the third part “Starting Over” is currently being recorded.

Whereas “Carried Away” primarily featured songs written and performed on piano, Hook’s guitar is the predominant instrument here, and as such, offers new insights into her songwriting and musicianship, together with the influences that have shaped her as an artist. The dreamy ambience on “Hidden In Plain Sight” refers back to a late ‘80s / early ‘90s indie sound, personified by groups like Madder Rose and Mazzy Star, though Hook’s take is rooted in her songs, and her ability to express a range of emotions with her exceptional voice.

As with its follow up, “Hidden In Plain Sight” isn’t an overlong record, but at over 25 minutes, it sticks around long enough to make its point. Her songs get under the skin in a most agreeable way, and although there’s nothing here that could be classed as pop (not in the way daytime radio or the charts understand the word), there’s no shortage of big choruses and vocal hooks. The title track is a pristine and perfect example of everything that Hook does right. The production is warm and lush, the drums and cello play rhythmic tricks, while vocals and guitar swoop and soar. It should feature on a thousand mixtapes alongside “Everyone's a Labyrinth”, a dark, gothic lullaby to sooth the most unruly of children.
www.thebrightforever.com
www.meganhook.com
www.reverbnation.com/meganhook
www.soundcloud.com/the-bright-forever
The Bright Forever CD Baby Page
Phil S.