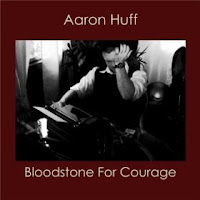 Aaron Huff is a writer of both songs and short fiction, so it’s no surprise that his words take centre-stage on his new album “Bloodstone For Courage”. It’s the right decision, as he possesses a keen turn of phrase and an ear for a clever rhyme. Musically things are kept pretty simple, with guitar and voice taking most of the strain, and although it’s a basic, uncluttered production, there’s nothing lo-fi about the result.

Thematically, there’s not much in the way of light and shadow. It’s a brooding, ominous collection of songs, which catalogue disappointment and despondency, which either finds Huff in a particularly dark place, or he’s got a remarkable talent for getting inside a character and relating to his doubts, fears and worries. I suspect it’s the latter – he’s a writer of stories; making this stuff up must be second nature.

As for the songs themselves, what they lack in pithy one-liners, they more than compensate with melodic hooks and strong narratives. He begins with “Our Hero”, a rumination on loss and learning to accept it. “Small Town Tragedy” wanders a similar path and “Four Years On” is gently affecting and brings to mind both John Prine and Cat Stevens. Other highlights include the evocative “Warm Beer” and the powerful final track “Martyr Me Baby”.
www.aaronhuffmusic.com
www.facebook.com/Aaron-Huff-Music
Aaron Huff CD Baby Page
Tony S.