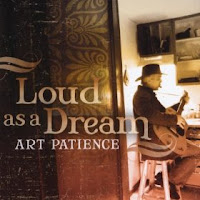 Born and raised in Seattle in the early ‘60s, Art Patience’s first musical experiences were hearing his mother sing in the Seattle Choir and attending concerts at the Opera House. He began playing harmonica at age eleven, and went on to major in Blues History and Music at The Evergreen State College. After graduation he played in a number of bands, eventually joining the Arizona R&B outfit Blue Z, before moving back to the Northwest and teaming up with renowned pianist Scott Cossu. Their musical partnership lasted 17 years, and he recently played on Cossu’s 2012 album “Jazz, Boogie & Déjá Blues”.

“Loud As A Dream” is Patience’s debut solo record, and marks a distinct change in direction for the veteran musician. While he hasn’t altogether relinquished his harmonica, his new album very much concentrates on singer-songwriter fare, and as such, guitar and vocals dominate proceedings. Style-wise, the blues are ever present, but also country and folk influences are at play. Indeed, put them altogether, and we might just have the living definition of “Americana” music. His voice, while it lacks the deep timbre of Johnny Cash or Merle Haggard, it shares many common attributes, insofar it’s a voice that oozes life experience and is a trifle weathered and beat-up around the edges - perfect for his songs.

The album begins with “Chop Wood, Carry Water”, a western harmonica sets the scene and Patience tells his tale of regret and redemption. “I May Be Crazy” whips up a cool ‘50s feel and its theme of love (and desire) gone askew may not be wholly original, but it’s fun and frisky, all the same. I’m always ready for a new “train” song, and with “Runaway Train” Patience comes up with his own; and the combination of a speedy, relentless rhythm and an accompanying harmonica is a winner.
www.artpatience.com
Art Patience CD Baby Page
Simon M.