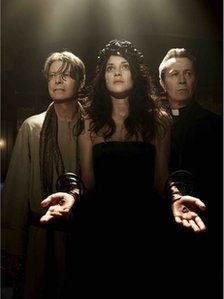 The video is for The Next Day, taken from his comeback album of the same name.

It depicts Bowie as a messianic figure, dressed in a robe and fronting a band in a basement bar.

Oldman plays a priest who dances with Cotillard before she bleeds from stigmata marks on her palms.

Bowie's last video, for The Stars (Are Out Tonight), featured another Oscar-winner, Tilda Swinton.

The new film was directed by photographer Floria Sigismondi and features characters dressed as clergymen amid heavy religious imagery.

As it ends with the characters arranged in a tableau, Bowie says: "Thank you Gary, thank you Marion, thank you everybody."

Oldman previously worked with Bowie in the 1990s when they performed a duet on guitarist Reeves Gabrels' 1995 album The Sacred Squall of Now.