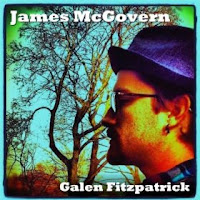 There’s an elegiac quality to Galen Fitzpatrick’s latest seven-track collection that’s rooted in the crumbling, post-industrial environs of Eastern Pennsylvania where he grew up. For all of us who have lived in cities, towns and villages where heavy industry has declined, huge factories have closed or mines have run dry, we can almost certainly identify with Fitzpatrick’s tales of decay, and the individuals who suffer.

When Fitzpatrick’s rock band Opium Rose folded in 2005, he returned to his acoustic guitar and began to write songs that told the stories he saw unfolding around him, and as a result, the songs on “James McGovern” feel personal and close-up - as told firsthand by someone who was there. Recorded at the acclaimed Cutting Room studios in New York, where classic alums by Red Hot Chilli Peppers, Lana Del Ray and The Postal Service were cut, it’s no surprise that the album’s production captures the attention from the off.

Indeed, lead track “Trucker's Song”, sets the tone immediately, it’s warmth and honesty enveloping the listener. The title track “James McGovern / Dark as a Dungeon” tells the story of an old coalminer and borrows from the Merle Travis’ song “Dark as a Dungeon”. It’s one of the highlights of the record, as is the poignant version of the old folk song “Oh Shenandoah”, recorded with his father, David Fitzpatrick.
www.galenfitzpatrick.com
www.facebook.com/GalenFMusic
Galen Fitzpatrick CD Baby Page
Tony S.