Review: Emily Cavanagh – Keep It With Mine

Emily Cavanagh – Keep It With Mine (Independent) 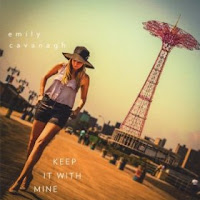 Perhaps it’s the Norah Jones effect, but over the past decade or so, jazz has become a major influence on singer-songwriters. Whether it’s a welcome development or not, cannot be judged simply on that one aspect. As always, songwriters are judged on the quality of their words and singers on their voice. Their influences are rarely discussed when the prizes are being handed out.

Emily Cavanagh was born and raised in Chicago, and is now resident in New York, where she runs a non-profit creative arts project for formerly homeless young adults, instilling in her students a love of artistic pursuits and, at the same time, releasing three albums of her own. Her latest, “Keep It With Mine” seems to be the most readily available, though all three titles are listed on Amazon, which is fortunate, as anyone listening to this ten-track collection will doubtless want to hear more.

Taking its title from a Bob Dylan song “Keep It With Mine” indicates, with some subtlety, and no little ingenuity, that Cavanagh sees herself primarily as a singer-songwriter. I’m inclined to agree; her songs tell stories that lay bare their subjects and impact on other songs, and she does so with an impressive turn of phrase. She begins with “We Were Young”, which, within its structure, contains elements of old European folk music, country twang, and more than ample pop smarts. Her narrative flows and the instrumentation is varied and sometimes unexpected.

“So It Goes” is an altogether different kettle of fish. Its jaunty piano and lightness of touch appears almost throwaway, yet its melody stays long after the music has finished, and Cavanagh’s vocal is faultless. “C'mon Let's Do” is just as catchy, its insistent rhythm driving the song along, and its simple “la-la” refrain impossible not to be swept away by. Whereas the elegiac “Flower & Stone” carries a deal of sadness on its shoulders, its effect magnified by what sounds like a lonesome pedal steel, and Cavanagh’s relatively subdued delivery.
http://www.emilycavanaghmusic.com/
https://www.facebook.com/pages/Emily-Cavanagh/245182320505
http://www.reverbnation.com/emilycavanagh
http://www.cdbaby.com/Artist/EmilyCavanagh
Tony S.