Review: Natalie Acciani – I Can Dream

Natalie Acciani – I Can Dream (Independent) 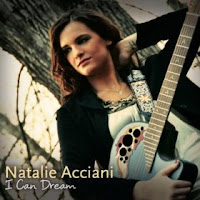 Natalie Acciani was born and raised in southern New Jersey, where, at an early age, she discovered country music. Already a gifted singer, when she was 13 she began vocal schooling with renowned opera singer Badiene Magaziner, who helped her develop her three octave range, and her well-rounded classical training included instruction in a wide variety of genres, including opera, jazz, Broadway, pop and, of course, country. She taught herself guitar at 17 and hit the open mic circuit, releasing her debut record “A Dangerous Thing” in 2010.

Maybe it’s her New Jersey upbringing, but Acciani’s style is a long way from pure country or the heavily produced country-pop that Nashville concentrates on these days. Instead, she incorporates a cool classic rocking sensibility into her songs, which fans of Tom Petty and Bruce Springsteen may well appreciate. Though only six tracks in length, “I Can Dream” is a fine introduction, and will inevitably lead new listeners to her earlier recordings.

The EP begins with “Today”; its upbeat sentiments are underpinned my what sounds like retro keyboards and a lively pedal steel guitar. Acciani’s a confident, refined singer, with a great variation of tone, which she puts to excellent effect throughout the collection. The title track is just as impressive, with Acciani’s sultry delivery taking centre-stage, and “Oh Darlin'” indicates a talent for cheese-free balladry.
www.natalieacciani.com
www.reverbnation.com/natalieacciani
Natali Acciani CD Baby Page
Phil S.