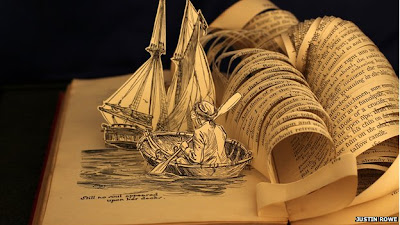 Mr. Rowe uses a small scalpel to create his sculptures

Unwanted books consigned to the shelves of charity shops have been rescued by a Cambridge bookseller and turned into works of art for a literature festival.

Justin Rowe started carving up the pages of old books as a hobby in 2010, using a small rotating-bladed scalpel.

Some of his art is now taking centre stage at the British Academy's free literature week celebrations in London.

His intricate hobby began when he wanted to create a Christmas window display for the Cambridge University Press bookshop where he works as a senior bookseller. 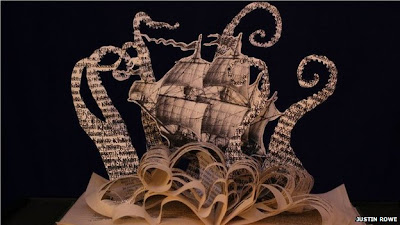 "My wife saw something about books being turned into art, and I thought, 'That looks a bit difficult, but I'll give it a go.'"

"I never use anything that has any kind of value. This really is art made out of other people's junk," he said. 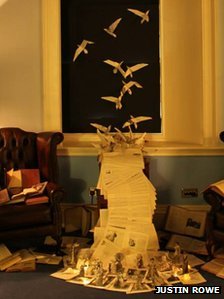 Although Mr. Rowe attended art college, he studied video art and said he had never tried sculpting before.

The inspiration comes either from illustrations within the books - where Mr. Rowe cuts and lifts them into 3D scenes - or "from my own sometimes bizarre imagination", he said.

They take anywhere from a few hours to a month to create, and he admitted his wife was now beginning to comment on the numbers of books and pages littering the house.

Some of his artwork is now on show as part of the London Academy's celebrations of literature.

Mr. Rowe's Turning the Page exhibition includes a one-off installation created for the academy from the pages of one book, with 3D characters at the foot and birds flying out of the top.

The British Academy's literature events are taking place until 24 May.