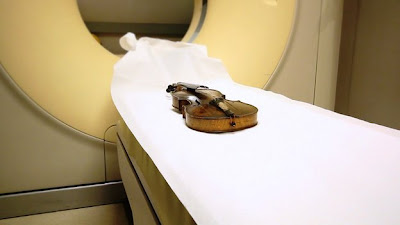 A violin thought to be the one played by the band leader of the Titanic as it sank has been declared genuine following a CT scan at a hospital.

Andrew Aldridge from auction house Henry Aldridge and Son said the scan proved the instrument was real "beyond reasonable doubt".

Radiographers at BMI Ridgeway Hospital in Wiltshire took a 3D image of the violin to examine it from the inside.

It has been at the centre of an authenticity debate for seven years.

Wallace Hartley, who came from Colne in Lancashire, and his orchestra, famously played on as the ship sank in the North Atlantic on its maiden voyage from Southampton in 1912, and were among the 1,517 who died.

"The scan revealed that the original wood was cracked and showed signs of possible restoration," said the hospital's imaging manager Astrid Little.

"The fine detail of the scan meant the auctioneers could examine the construction, interior and the glue holding the instrument together. The scan also assisted in validating the instrument's authenticity.

"We are very proud to have played our part in the violin's authentication. It was a great honour to have such a rare collector's item in the department."

In 2006, Henry Aldridge and Son - specialists in Titanic artefacts - was approached by the violin's owner who wanted to sell it, but it needed authenticating.

Over the last seven years, various experts have tried to authenticate the violin, including newspaper archivists, jewellery experts and the forensic science service who found the bodywork still had deposits of salt water.

The auctioneers declared the violin to be genuine in March, but said a CT scan was needed.

"The violin was in a heavy duty leather Gladstone type bag, so the violin would have come into contact with water, but it would have been protected by the leather," said Mr Aldridge.

"The instrument is also held together with animal glue, which melts when it is hot, not when it is cold.

"The silver fish plate on the violin along with some other items that was with it points to it being authentic - or an extremely elaborate hoax - so we needed to carry out thorough research and commission the correct experts.

"We've spent the last seven years gathering evidence and we're confident that 'beyond reasonable doubt' this is Wallace Hartley's violin."

Mr Hartley's body was recovered from the water about 10 days after the ship sank, but the violin was not listed among the inventory of items found with him.

It is claimed the violin survived in a leather case, strapped to Mr Hartley's body, which floated upright in his cork and linen lifejacket.

A diary entry by his fiancee, Maria Robinson, said it was saved from the water in 1912 and returned to her.

Following Ms Robinson's death in 1939, the violin was given to her local Salvation Army citadel and was later passed onto the current owner's mother in the early 1940s.

The violin - complete with its certificate of authenticity - is due to go on display in the US this month, and will eventually go to auction.

In April, maritime historian Daniel Allen Butler said the violin could not possibly have been recovered from the doomed ship's wreckage.

The genuine article would have fallen apart after exposure to the waters of the North Atlantic, he said, and the wood would soon have lost its shine and shape.