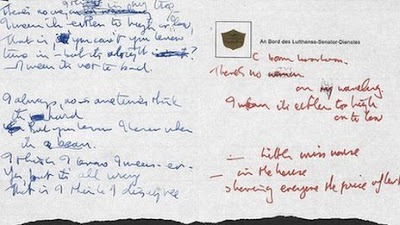 Beatles biographer Hunter Davies has donated letters and lyrics by John Lennon to the British Library as part of a new tax relief scheme.

His collection, which includes handwritten lyrics to Strawberry Fields Forever, is the first donation through the new Cultural Gifts Scheme.

The initiative, which was introduced in March, encourages people to give gifts to the nation for a tax reduction.

Davies said the British Library was the "perfect home" for his memorabilia.

Culture minister Ed Vaizey said the "incredibly generous" donation was a "testament to the strong culture of philanthropy" in the UK.

A total funding of £30 million is available annually for the Cultural Gifts Scheme, which will allow recipients to reduce their tax by 30% of the value of the object over five years.

It is estimated that Davies, who wrote the only official biography of The Beatles in 1968, will reduce his tax by £319,500.

"I want my Beatles collection to be kept together, in one place, and on public display, and the British Library is the perfect home for it," the 77-year-old said.

"I'm really pleased the cultural gifts scheme has helped me make this a reality."

The British Library's Roly Keating said he was "delighted" to receive the "iconic items on behalf of the nation".

The collection also includes an early draft of lyrics from In My Life, which featured on 1965 album Rubber Soul, with a line about Penny Lane crossed out.

Davies received letters from Lennon, whom he befriended in the 1960s, and has been collecting other correspondence from the legendary musician.