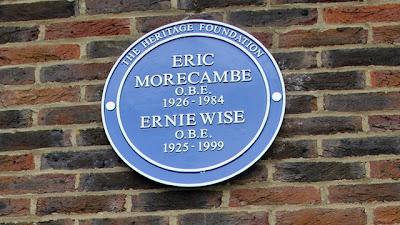 A blue plaque in tribute to comedy double act Eric Morecambe and Ernie Wise has been unveiled at the studio where much of their best work was shot.

The Heritage Foundation erected the plaque at Teddington Studios in west London.

It was revealed by Mr Morecambe's widow Joan and daughter Gail in front of guests including comedian Bernard Cribbins and presenter Michael Aspel.

Studio One at Teddington was the production home for the last four series of the duo's programme.

Forming in 1941, the pair rose to fame with their blend of sketches, comedy catchphrases and visual gags.

Episodes of The Morecambe and Wise show are regarded as among the best British comedy programmes ever produced.

Joan Morecambe said it was a "very special day indeed".

"And they were very funny," she added.