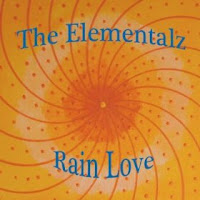 Hawaii based duo The Elementalz are husband and wife team, Brent Magstadt and Sherri Thal. Magstadt is an accomplished guitarist and multi-instrumentalist with a history of live performance that goes back to the mid-‘70s, though he didn’t release his debut solo album until 2005. Thal’s musical history goes back to 1980, and over the years she’s taught voice, violin and musical theory and played with Michelle Shocked and the Lava Jam Band. Together they released their first Elementalz EP in 2009, and have now followed it up with “Rain Love”, a seven-track collection that showcases their songwriting, musicianship and harmonies.

I’m sure their sunshine island surroundings have influenced their songwriting, but it’s not quite as overt as one would have expected. Their style is acoustic folk pop – a little downbeat in places – that references artists like The Grateful Dead, Country Joe and various Beatles and Byrds. Beginning with “Simple Thoughts”, Magstadt takes lead and its positive, life-affirming message is heartfelt and uncomplicated. Thal’s “London Town” feels decidedly English in its execution, and I’m reminded a little of June Tabor, and the first album she made with Oysterband back in 1990. They come together beautifully on “On the Water”. Thal’s high singing is incredibly effective, and when the pair sing in unison, they complete the picture.
www.theelementalzmusic.com
www.facebook.com/The-Elementalz
The Elementalz CD Baby Page
Tony S.