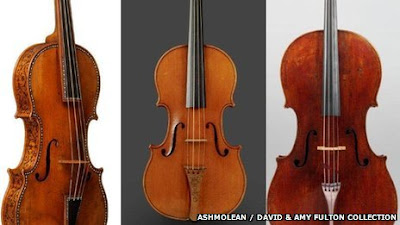 The biggest ever UK exhibition of Stradivarius musical instruments is to take place in Oxford.

The Ashmolean Museum will display 20 items made by Antonio Stradivari, some of which have not been seen in public.

Curator Dr Jon Whiteley said: "To bring together so many rare and important violins - by the greatest maker of all time - is an extraordinary event."

About 650 instruments made by Stradivari in the 16th Century still survive.

He is considered to be the most distinguished craftsman of the instrument, and was commissioned by the likes of King James II and King Charles III of Spain.

The exhibits date from what is considered his golden period of 1700-1725, when his instruments became the classic models on which later violins and cellos were based.

They include the Lady Blunt which sold at auction in 2011 for £9.8m. It was named after Lord Byron's granddaughter Lady Anne Blunt who owned it for 30 years.

Another belonged to Giovanni Battista Viotti, who helped establish the fame of Stradivarius violins in the early 19th Century.

The Batta-Piatigorsky cello of 1714 was played by Russian cellist Gregor Piatigorsky.

He wrote in his autobiography: "It spurred me on to try to reach its depths, and I have never worked harder or desired anything more fervently than to draw out of this superior instrument all it has to give."

The museum already houses the Messiah violin, said by aficionados to be one of the most famous violins in the world.

Professor Sir Curtis Price, former principal of the Royal Academy of Music and warden of New College Oxford, said: "In bringing together from around the world other examples of his finest work - violins, violas and cellos - this exhibition will become a Mecca for all enthusiasts and anyone who wants to learn more about the greatest of all violin-makers."

Violin expert Charles Beare described it as of "supreme importance".

The exhibition runs from 13 June to 11 August.

Antonio Stradivari - maker of the world-famous violins - was born in 1644 and died in Cremona, Italy, in 1737.
He made more than 1,000 violins, violas and violoncellos, and was commissioned by royalty throughout Europe.
Golden period considered to be from 1700-1725.
It is believed that around 650 of the instruments have survived.
His most famous violins include the 1715 Lipinski and the 1716 Messiah