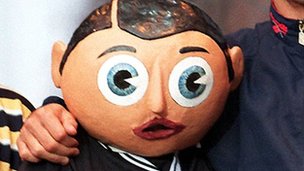 An online appeal to raise funds for a tribute documentary to cult comedian Frank Sidebottom hit its £40,000 target hours ahead of deadline.

The appeal to pay for Being Frank: The Chris Sievey Story closed at 01:00 BST on the Kickstarter website.

Filmmaker Steve Sullivan said the project had received "amazing" support since its launch a month ago.

Mr Sullivan filmed The Magical Timperley Tour, a documentary where Sidebottom toured the area of Greater Manchester where he lived with 100 fans on an open top bus.

"We talked about making another film but sadly he died and I just started to get fascinated by the idea that nobody really knew who Frank Sidebottom was and who was beneath the head," he added.

Mr Sullivan added: "This is going to fund an incredible documentary."

Kickstarter is a website that allows people to raise funding for films, games, music, art, design and technology.

Mr Sullivan said the funding will enable the film to use footage from TV performances of Frank Sidebottom as well as rare interviews with his creator Chris Sievey.

Sievey, who died aged 54, hit the charts in the late 1970s with his Manchester punk band band the Freshies and had a hit with I'm In Love With The Girl From the Manchester Virgin Checkout Desk.

But it was Frank, the comedy character he created satirising the music business, that he was best known for.

Often accompanied by his sidekick Little Frank - a glove puppet made in his own image - Frank became a regular face on TV in the 1980s and 1990s.

His TV fame peaked in the early 1990s with his own series Frank Sidebottom's Fantastic Shed Show.