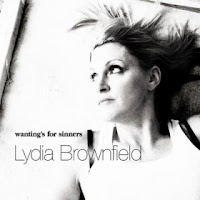 Based in Columbus, Ohio, Lydia Brownfield has been writing songs since the late ‘80s, playing gigs and releasing records, and slowly and surely honing her craft. “Wanting’s For Sinners” is perhaps a culmination of all those years work, its seven tracks a distillation of Brownfield’s talents and a chance to share a collection of songs that feel personal and utterly distinctive.

Her earliest musical loves were post-punk groups like Siouxsie and the Banshees, The Smiths, Joy Division and Talking Heads, but I’m sure she’d be the first to admit that her tastes have broadened since then to include a vast array of artists and genres, from Latin jazz and old blues to The Eels and Buffy Sainte-Marie. Listening to these songs, it’s impossible to pin down particular influences, and what we’re left with is a short album’s worth of songs that are chock full of sweeping indie-style melodies and songs with something important to share.

Beginning with “Fiery Crash”, its dark folk-rock tone brings to mind All About Eve. It’s followed by the pivotal “Prentiss Song”, a deeply sincere and genuine song that relates a friend’s experience with cancer - though there’s a little digging involved to get the full story. The result is both moving and uplifting. Together with the haunting, gypsy-carnival-esque title track, it’s probably my favourite from the record, though apart from its overall brevity, there’s nothing here that in any way disappoints.
www.lydiabrownfield.com
www.facebook.com/Lydia.Music
www.reverbnation.com/lydiabrownfield
Lydia Brownfield CD Baby Page
Phil S.