Review: Grace Park & The Deer – An Argument For Observation 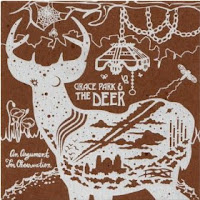 Grace Park formed The Deer in early 2012 with lead guitarist Michael McLeod (Good Field, Richard Linklater film composer), Jesse Dalton (Green Mountain Grass) on upright bass, and Alan Eckert (Dimitri’s Ascent) on drums and backup vocals. Their debut album was recorded in McLeod’s home studio with over 20 musicians and a dozen singers all making contributions. With so much going on, “An Argument For Observation” could have sounded unfocussed and over-cooked, but, in fact, the opposite is true. It’s delicate and wispy, and ethereally beautiful, in much the same way Joanna Newsom records are.

The Texas group spent over a year on their debut, and the attention to detail is evident throughout its ten tracks. Produced by Park, she obviously knew exactly how she wanted her songs to sound, and I suspect she’s overjoyed with the results. There’s no hint of compromise, from the double tracked vocals and violin on opening track “All the Leaping”, to the stunning unaccompanied harmonies on the concluding “No Code”. In-between “Mary Sue” reels us in with a delightful vocal hook, “Army Ants” utilizes magnificent strings, and contrasts perfectly with Park’s confident delivery and “As Women Go” introduces a graceful piano and weathered guitar, and together they take the record in a rootsy Kate Bush direction. Faultless.
www.thedeer.org
www.graceparkandthedeer.bandcamp.com
Grace Park & The Deer CD Baby Page
Phil S.