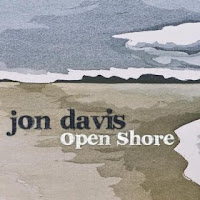 Jon Davis is a classically trained singer, a jazz pianist and singer-songwriter from Montreal. “Open Shore” is his second album (his debut collection “Golden Hue” was released in 2009) and it reveals a gentle folk-pop style that will remind senior listeners of artists like James Taylor and Nick Drake. Davis’ voice most resembles the former, though there’s a complexity to his sound and style that reflects both his jazz interests and a considerable artistic ambition. The results are simultaneously easy on the ear, but equally inclined to stretch the listener, as Davis himself is stretched.

“Open Shore” begins with the sublime “Overcome”, its piano arrangement propels Davis’ song and fills in the gaps, until the final half minute or so, when its fragility is exposed and its conclusion is almost Antony Hegarty-esque – it’s stunningly executed and quite moving. “Streets Aren't Paved” introduces new instruments, including a dirty sounding guitar, and the feel of the record has shifted somewhere new. Fortunately Davis’ song and voice provide dual anchors, and however the approach differs, the destination remains the same. It’s a fine song, with a distinct blue-collar sensibility and includes a chorus that radio should be excited by.

It’s an album that deserves to be heard from beginning to end, preferably late in the evening, however it would be utterly remiss to sign off without drawing attention to tracks like “Forest in the City”, which hits like a wave, or “Curtain”, which is beautifully constructed, with a hook that may have to be surgically removed.
www.jondavismusic.ca
www.facebook.com/jondavismusic
Jon Davis CD Baby Page
Phil S.