Review: Caitlin Mahoney – West For A While EP

Caitlin Mahoney – West For A While EP (Independent) 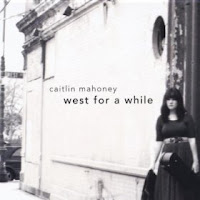 Based in New York City, Caitlin Mahoney is a young singer-songwriter with plenty of experience under her belt. She grew up listening to Springsteen, has been involved with musical theatre, studied English, Spanish and music at Florida State University, lived in Spain for a semester and played shows everywhere she could, from Tallahassee to Valencia, via Paris and Munich.

It’s understandable that she’s won awards for her stage work and was invited to join the Cappies International Theater for a performance at the Kennedy Center in Washington, D.C. when she was just seventeen, as her voice is her most striking asset. Laura Cantrell provides the most obvious comparison, though it’s a far purer and more powerful instrument that Mahoney has at her disposal, and it works beautifully in tandem with her urban-folk, country-roots material.

Her debut release “West For A While” makes a strong opening statement. All four tracks are melodically strong, played with passion and joy, and Mahoney has a songwriter’s ear for quirky twists and turns. Opening with the title track, its positivity is catching and the vocals impress. “Devil On the Side” slows things down considerably, and the harmonies, coupled with Mahoney’s sultry, measured delivery, gives it wings to soar.
www.caitlinmahoney.com
www.facebook.com/caitlinmahoneymusic
www.reverbnation.com/caitlinmahoney
Caitlin Mahoney CD Baby Page
Tony S.