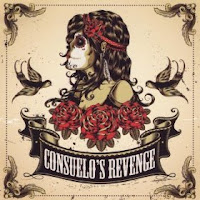 Consuelo’s Revenge is a six-piece roots-Americana / folk-rock outfit from Providence, Rhode Island, with a dark, untamed edge to their sound. UK equivalents would be groups like the Pogues, The Men They Couldn’t Hang or the Folk Devils, though there’s no mistaking Consuelo’s Revenge’s American roots, or their ability to find new territory to explore within their chosen genre(s).

They’re fortunate to have several talented singers within their ranks. Amanda Salemi, Alexandra Gibbons, Nicholas Smyth and Ian Lacombe bring a profusion of vocal variety to the table, and the girl / boy mix works particularly well, whether they’re singing together or one or other is taking the lead. Their self-titled debut clocks in at a short and sweet 33 minutes, but within the ten tracks, they show themselves to be versatile musicians, able songwriters and fully aware of the importance of a healthy hook and a robust folk tune.

Standout tracks are plentiful. Opening cut “Pasadena” is slinky and sultry with a rolling gypsy rhythm and a tale of wrongdoing and redemption to tell. “Forest Flower Waltz” enjoys a similar Romany atmosphere, with a touch of Mexicana on the side and their version of “Henry Lee” is an upbeat revelation. Recorded relatively recently by both Bob Dylan and Nick Cave, Consuelo’s Revenge’s rollicking take is a fine addition to the canon.
www.facebook.com/ConsuelosRevengeMusic
www.consuelosrevenge.bandcamp.com
Consuelo's Revenge CD Baby Page
Phil S.