Amazon to allow e-book fan fiction sales in US 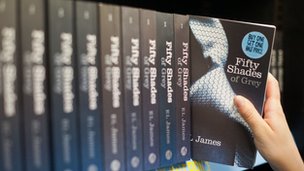 Amazon has announced that fan fiction authors will be able to sell some of their work on the firm's Kindle e-book platform.

Publication outside of blogs and online fanzines is often difficult because of copyright issues.

A deal with a TV division of Warner Brothers enables fan fiction based on three TV series to be self-published.

The three series are Gossip Girls, The Vampire Diaries and Pretty Little Liars, under the arrangement between Amazon and Alloy Entertainment, owned by Warner Brothers Television Group.

Authors will be able to upload their writing for sale via a new platform called Kindle Worlds, which will initially only be available in America.

There is no launch date yet for the platform.

Authors will receive 35% of the overall price of their work in royalty payments if they have written 10,000 words or more, and 20% for works of 5,000-10,000 words under a new pilot scheme for shorter stories.

In return Amazon Publishing will own the global publication rights to the works, says the announcement.

Fan fiction containing sexually explicit scenes will not be accepted, the firm said.

Harry Potter, Star Trek and Buffy the Vampire Slayer are among the most common inspirations for fan fiction, he added.

"While some authors disapprove of the practice, many of the top-selling genre writers, including JK Rowling, Stephenie Meyer and Joss Whedon, encourage use of their characters by fans," wrote Mr Bercovici.

The Fifty Shades of Grey trilogy, which has sold more than 70 million copies worldwide, was originally written by author EL James as fan fiction based on the novels and film franchise Twilight, by Stephenie Meyer.