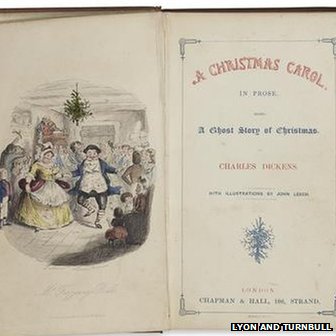 A treasure trove of literary first editions collected by an English teacher has sold at auction in Edinburgh for a total of £226,000.

Bruce Ritchie, from Stirling who died in October 2012, owned first editions of classic works such as Charles Dickens' A Christmas Carol (1843).

The lot also contained The Wind In The Willows by Kenneth Grahame (1908) and Evelyn Waugh's Brideshead Revisited.

A first edition of F Scott Fitzgerald's The Great Gatsby was bought for £1,875.

A movie adaptation of the story by Australian director Baz Luhrmann and starring Leonardo DiCaprio is opening the Cannes film festival.

A first edition of James Joyce's Ulysses (1922) was among the lots and was sold for £4,400 by Lyon & Turnbull which described the collection as "one of the most remarkable private libraries of English literature" to come to auction.

Mr Ritchie attended Dollar Academy in Clackmannanshire, studied English and German at St Andrews University, then took up a post at Merchant Taylors' private school in London where he was described as an "inspirational" teacher.

He taught the son of playwright Tom Stoppard, who paid tribute following Mr Ritchie's death last year, saying: "I've known very few people as kind, as learned, as civilised as Bruce. The world is poorer without him."

John Sibbald, book specialist at Lyon & Turnbull in Edinburgh, said after the sale: "This was an outstanding result."

Some of the first editions in the sale