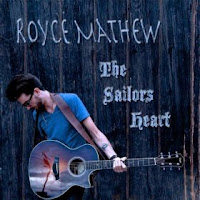 “The Sailor’s Heart” is Royce Mathew’s debut record, a six-track collection that was inspired by annual trips to a beach on Lake Winnipeg, in the Canadian province of Manitoba. Mathew describes the shoreline as “his favourite place on earth”, and much of the landscape, and the lake views they proffer, can be found in Mathew’s words, but most of all he’s a storyteller, using the scenery to propel his tale.

When it comes to sound and style, the Edmonton native has a great deal in common with artists such as Luke Doucet, and Simon Felice, though he’s a distinctive writer, and on opening cut “Blade of Grass”, though the production is spartan and the arrangement simple, he effortlessly holds our attention for the songs short duration. “Girl” is considerably more substantial. A country-folk vibe transports the listener into Mathew’s world, and some delicate finger-picked guitar provides detail.

The six-plus minute near-title track (“The Lady and the Sailor's Heart”) is a master-class in epic folk narrative. His use of imagery is faultless as he leads us through lakeside landmarks, and rhythmic changes of pace concentrate the mind wonderfully. It’s probably the standout song in the collection, though there’s plenty of stiff competition throughout the EP’s half dozen tracks.
www.facebook.com/Royce.Mathew
www.roycemathew.bandcamp.com
Royce Mathew CD Baby Page
Tony S.