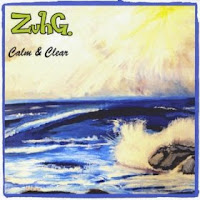 Lead vocalist (and guitarist) Bryan Nichols has a voice that might be the missing link between Bob Weir and Chris Barron, and the group incorporate elements of jazz, ‘70s rock and roots reggae, without ever losing sight of the song. Clocking in at less than half an hour, “Calm & Clear” may well be an exercise in concise songwriting and self-restraint, though live on stage, I can imagine songs like the opening cut “Everything Is Different” and the jaunty, continental “A Walk in the Park” get to stretch their wings and fly.

Actually, there’s no shortage of fine songs on “Calm & Clear”, but you can’t help but wish they’d stick around longer. The old maxim about “leaving them wanting more” obviously applies here, although, there’s always the option to play the whole record again, and it’s one, I’m sure, that’ll be regularly opted for. Repeated plays emphasizes certain songs, and it’s impossible to ignore the charms of “Love to Love”, where Jesi Naomi takes lead vocal to fine effect and the spiky “Orange”, which could almost be the Arctic Monkeys, had they been raised on love and lentils by hippies in California.
www.zuhgmusic.com
www.facebook.com/internetgodz
Zuhg CD Baby Page
Phil S.