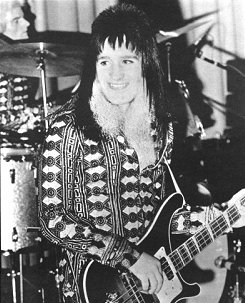 Trevor Bolder, the bassist in David Bowie's legendary 1970s backing band Spiders From Mars, has died from cancer at the age of 62.

Rock band Uriah Heep, whom Bolder joined in 1976, announced the death of "a world-class bass player" and "world-class friend" on their website.

He stopped playing with the band a few months ago because of poor health.

Bolder appeared on classic Bowie albums including The Rise and Fall of Ziggy Stardust and the Spiders from Mars.

"Trevor was an all-time great, one of the outstanding musicians of his generation and one of the finest and most influential bass players that Britain ever produced," Uriah Heep said in a statement.

The death comes a few weeks after the 20th anniversary of the death of guitarist Mick Ronson, another of the Spiders From Mars.

Spandau Ballet guitarist Gary Kemp, who presented a BBC Radio 2 documentary about Ronson, paid tribute to Bolder on Twitter, writing: "RIP another Spider from Mars, a kind and decent man, Trevor Bolder. Love and peace to his family."